When I finally decided to invest in a home gym, I wanted to make sure that I was getting the best possible value for my money. After doing some research, I discovered that there were two models that really stood out from the rest: the Marcy home gym MWM 988 and 990.

But, there was one tiny problem.

I had no idea about the differences in the two. They both looked identical, have the same weight stack, workout stations and even have the same price tag.

Even the sales guy was as baffled as I was. So, I spent a lot of weeks researching and decided to put together this comprehensive guide that will show you the key differences between these two home gyms.

I now own one of these and I am going to share at the end, which one I bought and why. So stay tuned. 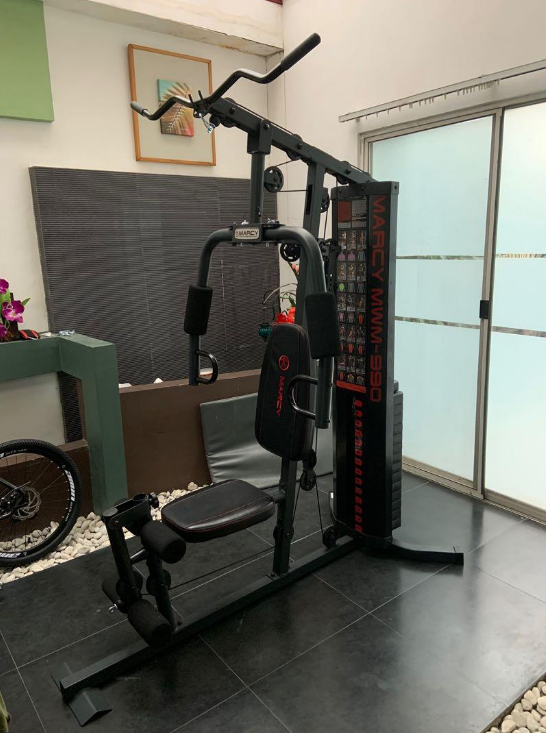 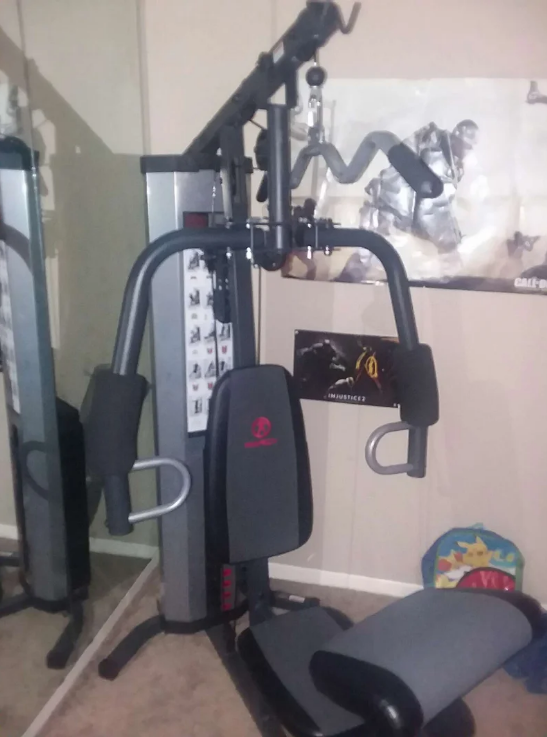 Marcy is one of the top brands that you will find when shopping for a home gym and the Mwm 988 and 990 are two of their most popular models.

Both of these gyms have a 150 pounds weight stack, which is plenty for most recreational users. Here's a more detailed overview of each one. 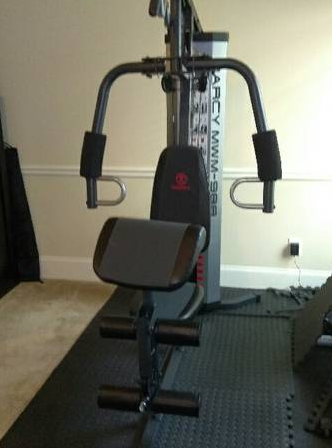 The MWM-988 is one of Marcy's bestselling home gyms and it's not hard to see why.

This home gym has all of the basic stations that you need for a well-rounded workout including a pec deck, leg developer, high pulley (this one's quite handy for overhead cable curls and similar workouts) and low pulley.

It also comes with a lat bar so that you can do some pulldowns - for those who love to work their back after chest day. A 150 lbs. weight stack and 14-gauge heavy duty steel construction complete the package.

This is a great gym for beginners and intermediate users who are looking for a quality home gym without breaking the bank. 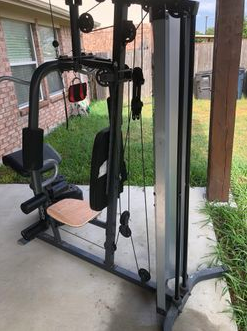 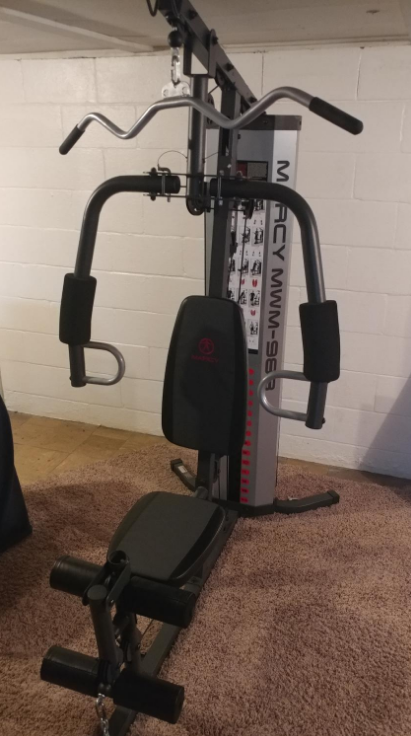 There are a lot of boxes that this gym ticks for me. Firstly, it has a 150 lbs. weight stack which is more than enough for most people. The fact that it comes with a double pulley station is also a big bonus as you can swap easily between high and low pulleys.

The latter is a must-have if you're in need of ring row alternatives for back exercises, such as rows and lat pulldowns. The steel construction is also very solid, which gives me peace of mind that it will last for many years. 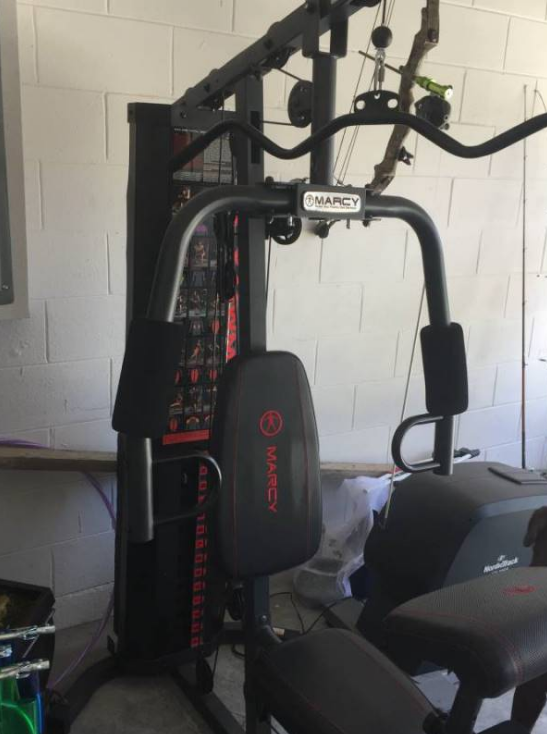 The MWM-990 was announced as the successor to the MWM-988. So, most people expected it to be a higher-priced version of the 988 with a few upgraded features.

It has the same weight stack, stations and even dimensions as the 988. 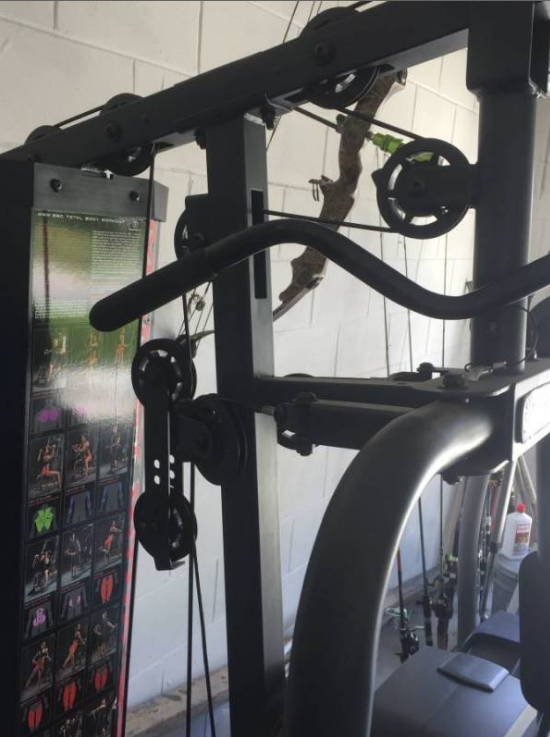 The Marcy MWM-990 is built like a tank and features a very space-saving, intuitive design. Despite having the same dimensions and the same workout stations as the 988, it actually feels more compact.

That's not all. The layout is more intuitive. I like the fact that the same station with press arms can be used for butterfly presses and chest presses. Ditto with the lower pulley station which connects to the leg developer. It's a smart way to save space. 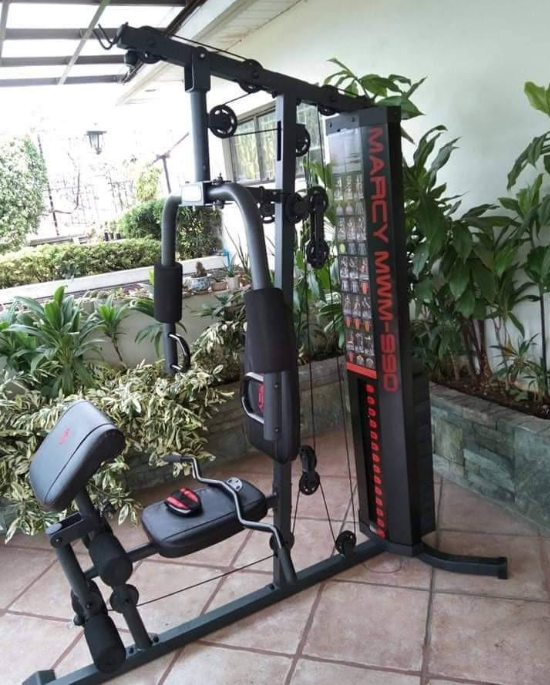 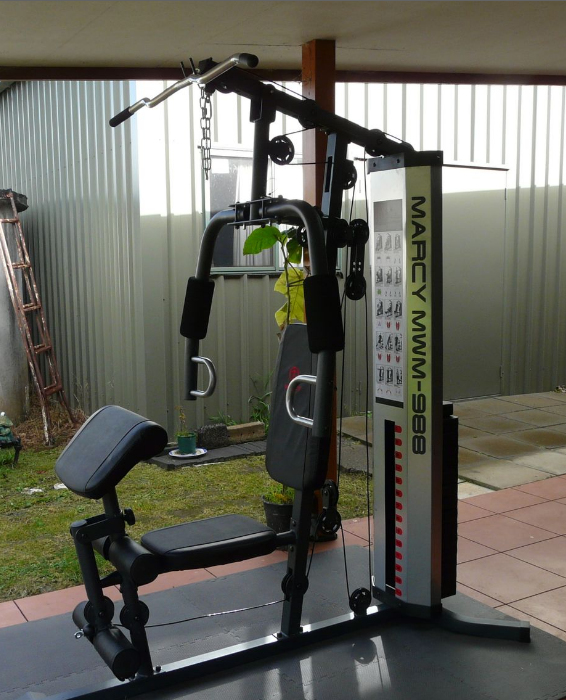 Coming to the big question. What is the difference between the Marcy 988 and 990? Well, there is one major difference. The appearance. That's right. Both these are identical in terms of dimensions and stations. The only difference is that the 990 looks sleeker. 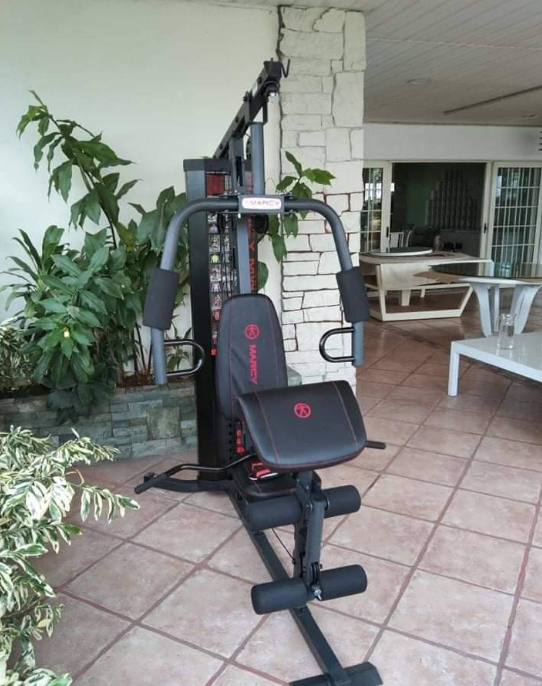 The MMW-990 in my opinion looks a lot sleeker than the 988. The dimensions are the same, mind you. But the powder coated black and grey finish and the positioning of the weight stack just looks a lot nicer on the 990. 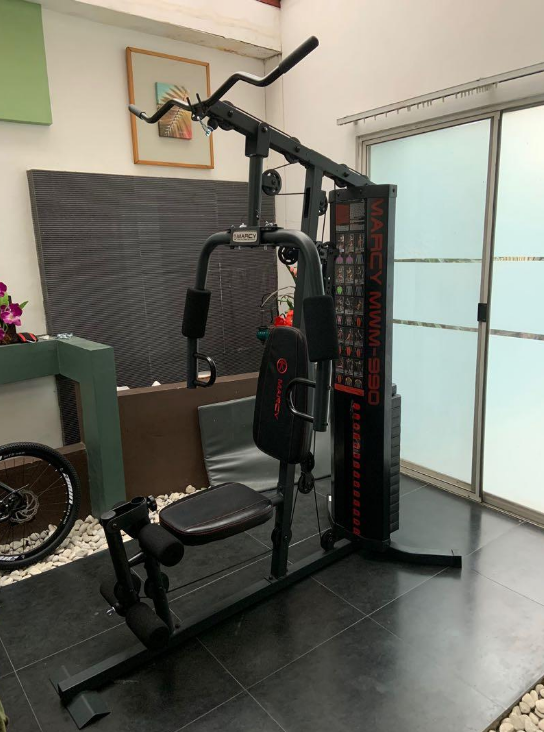 None of these issues seem to be present on the 990. 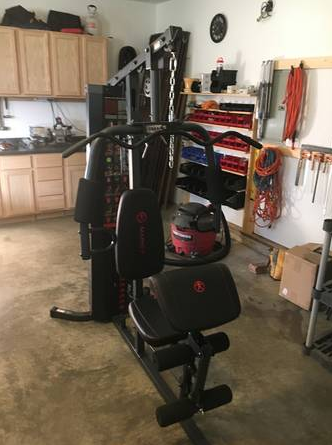 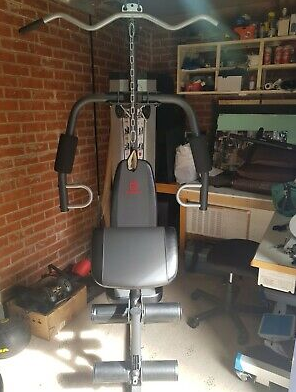 Let me quickly run you through a head-to-head comparison of the Marcy 988 vs 990. 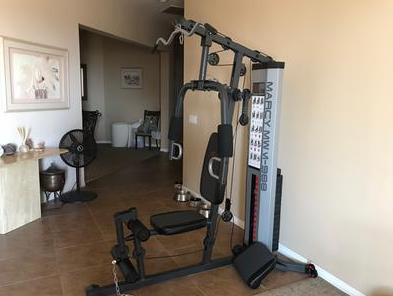 It's even-stevens here. Both these gyms have the same workout stations and will allow you to perform the same exercises. You can get a bit creative and use the seat for standing leg curl workout.

This not only means convenience, it also saves you money on the equipment that you would otherwise need for all those workouts.

Both have a weight stack of 150 lbs and can accommodate a maximum user weight of 300 lbs. So, if more variety is what you seek, then you need to invest in some additional accessories like the V-Bar cable attachment, which is sold separately.

Which Home Gym Is Safer to use?

Both these gyms have an excellent safety profile. The 14-gauge steel construction ensures that the gyms can take a beating and not give way.

Both have padded press arms to protect your hands and a weight stack lock to ensure that the weight stack doesn't come crashing down on you while you're working out.

The base comes padded with non-slip rubber feet to ensure that the gym doesn't skid while you're working out.

In terms of safety, both these gyms get a big thumbs up from me.

That said, if you have seniors or beginners at home who might use these, I would recommend going for the MWM-990 because of the better quality weight stack lock. Even if you use the lock at the second pin, which is 20 lbs., a sliding lock might be uncomfortable for a senior.

Which Has a Better Design and Is Better for Smaller Places? 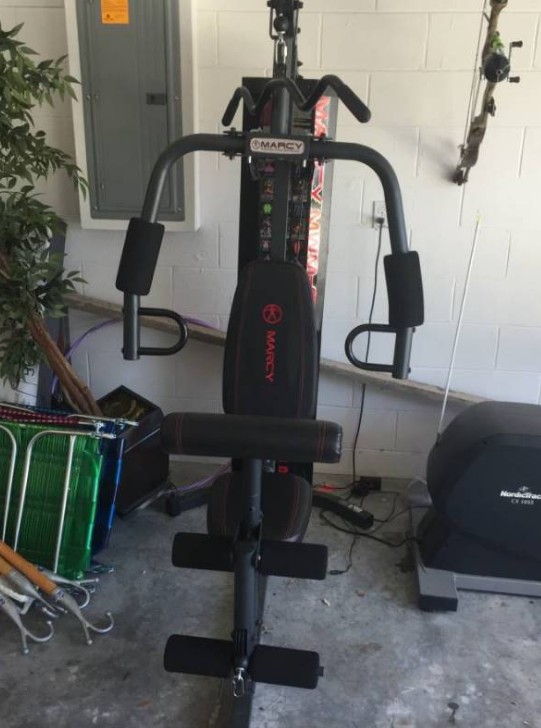 Both have the same dimensions, that is 68"L x 42"W x 78"H. But personally, I find the MWM-990 to have a sleeker design. The weight stations are better positioned and the overall look is more polished.

I also like the fact that it has a powder-coated black and grey finish as opposed to the 988's all-black finish.

Which Is Easier to Assemble? 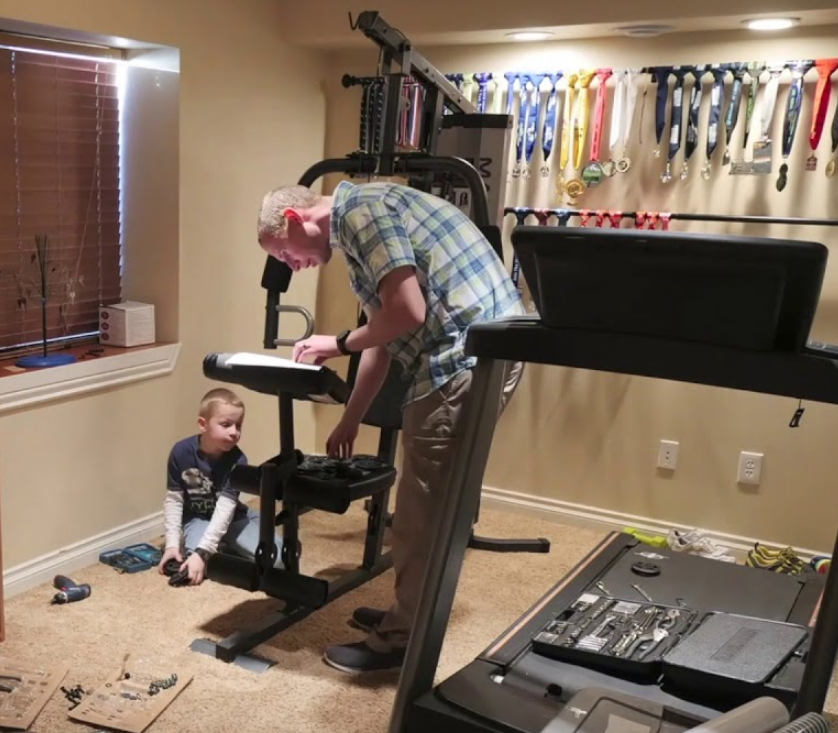 Marcy provides one of the best and most detailed assembly instructions out there. Their gyms also come mostly pre-assembled, which makes the job a lot easier.

That said, the MWM-990 is easier to assemble than the 988 because of its more intuitive design. I was able to put it together in about an hour by myself.

Customer reviews mention that a few people have struggled to put the 988 together and have had to call in a technician for help.

So, if you're not too handy with tools, I would recommend going for the MWM-990.

What Is The Maximum User Weight Capacity for Each Home Gym? 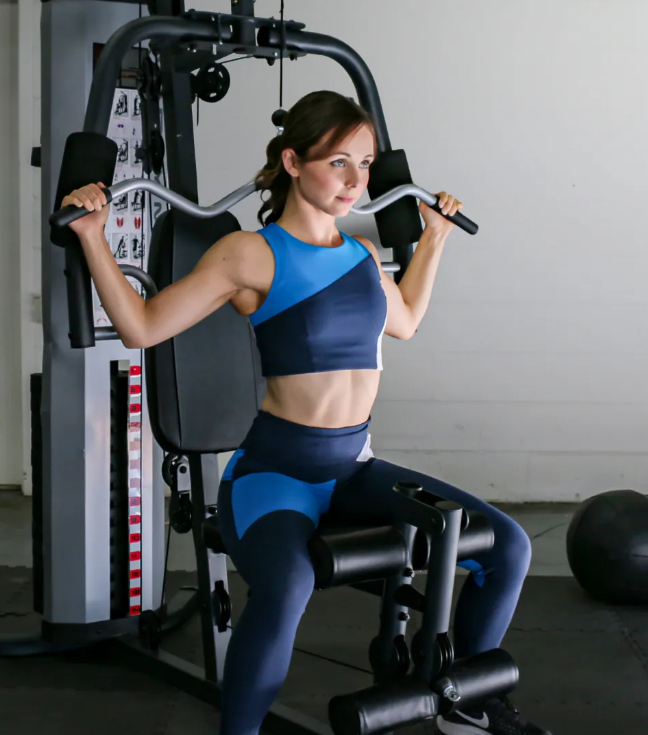 Both these gyms have a maximum weight capacity of 300 lbs. That's more than enough for most recreational users. Unless you plan to use this gym for powerlifting or bodybuilding, you should be fine.

The weight stacks on both these gyms are also identical at 150 lbs. So, this is certainly not a problem area.

How Do Both Home Gyms Compare when It Comes to Price? 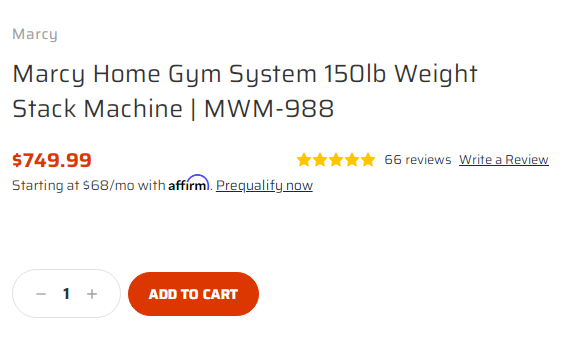 What About Warranty? Which Home Gym Has a Better Warranty?

Marcy offers a 2-year limited warranty on the frames of both these gyms and a 1-year warranty on parts. So, in terms of warranty, you're again looking at even-stevens.

What Are The Customers Saying About Each Home Gym?

Coming to one of the most important factors, customer reviews, I'm happy to report that both these gyms have excellent reviews universally. This includes online shopping portals as well as the Marcy website itself.

A buddy of mine deals in home gym equipment and he tells me that the 990 is a tad more popular than the 988. Thanks to him, I was able to speak directly with a few customers who've bought and used both these gyms.

Here's the general consensus on both these gyms.

The 988 actually has a 4.6-star rating on the Marcy website, which is very good. But what I found most interesting were the comments people had made about the gym.

Most people loved the quality of the build and found it to be very sturdy. They also liked the fact that it comes with a lot of workout stations, which is always a bonus.

A few people even said that it was very easy to assemble, contrary to what I'd heard before. So, that's definitely a plus.

The only real complaints people had were about layout, which tends to eat up your floor space, and the weight stack locks, which are a bit flimsy.

The 990 has a 4.7-star rating on the Marcy website, which is even better than the 988. The comments people made about it were also very positive.

Most people loved the sleek design, which is more compact and takes up less space. They also found it very easy to assemble, which is always a good thing.

A few people did mention that the weight stack locks were flimsy, especially if a heavy user is working out on it. But other than that, there were no real complaints about the 990.

After carefully considering all the factors, I would say that the Marcy 990 is the better home gym of the two. It's more compact, easier to assemble, and has a sleeker design. Plus, it's just as sturdy and well-built as the 988.

The kicker is that they are priced exactly the same, so there's really no reason to choose the 988 over the 990. 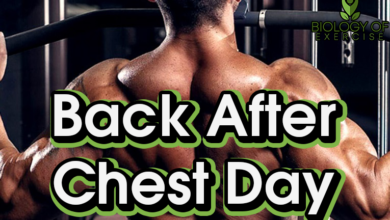 Back After Chest Day 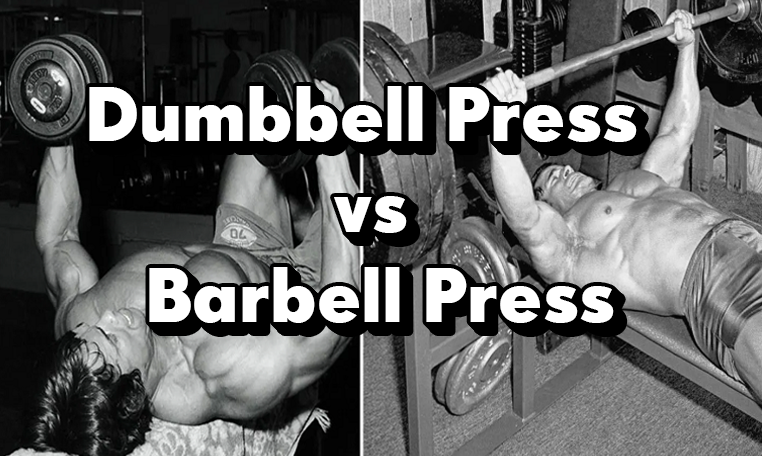 Dumbbell Press vs Barbell (Bench) Press: How Are They Different? Is One Better?